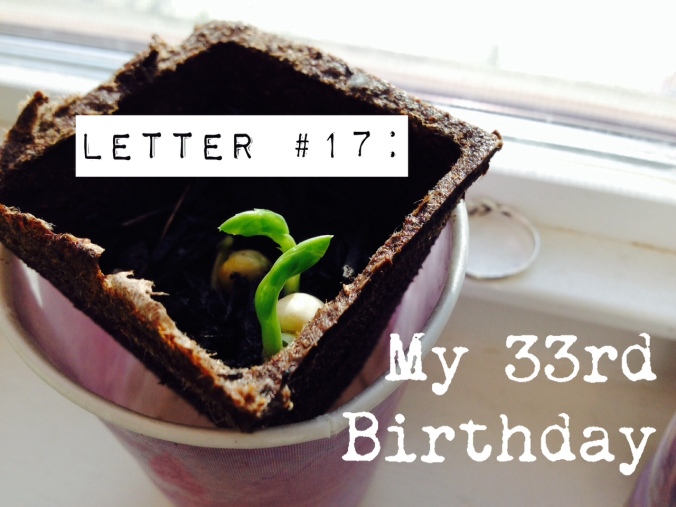 Today is my 33rd birthday.

When I was pregnant the first time around, I attended a (very) brief set of classes for expectant moms at our local hospital. Of the three other young women in the class, all of them looked about twelve to me. They were probably more like 18 or so, but I was nearly 30. That’s a pretty big difference. I was the only attendee who came with questions about hospital protocol and expectations, and I’m guessing the only one with pretty strong feelings about her birth plan. I might have been the only one who was married.

At my next doctor’s appointment, I asked my OB if I was old to be having a baby. He said no—he had lots of patients much older than I was. But when I told him about how young the other women seemed in the hospital class, he qualified his earlier statement: “I guess you are relatively old to be having your first baby.”

My mom was in her late twenties when my brother was born; she’d just turned thirty a few months before I came along.

So this age feels about right to me, though I admit that it would have been easier to bounce back physically after your births if I’d been ten years younger. (After the first unmedicated labor and delivery, I felt like I’d run a marathon without any training.)

Yes, there are reasons for having babies young that I can only appreciate now, now that I’m not young. If I hadn’t lived a childless, adult, happily married life for 8 years before you were born, for example, I’d probably mourn that life of freedom a little less than I do.

But I wouldn’t change it if I could. I like my thirties. I like raising you in my thirties.

I’m more reflective and laid back as a parent than I would have been in my early twenties; young people fresh out of college have such fervent convictions and clarity. Granted, I still have conviction—and I probably voice that conviction more than the average person—but I’m gentler than I was ten years ago. And I hope more patient.

I’m probably as stubborn as I ever was, and I still worry a lot, but I have a lot better grasp on the things that really matter.

And the things that don’t.

I’m still easily distracted and can’t multi-task, but I know that relationships with people are more important than finishing the book before my weekly reading group.

I’m better at appreciating beauty in normal, everyday life, but I’m still a far cry from thinking that motherhood cultivates grace. I don’t see grace here, and I’m fine with saying so. That’s probably something an older parent is better at, too. In my thirties, having lived my last decade in a different season, I’m comfortable with knowing that this season, like that earlier one, won’t last forever. It makes me grateful, but still exhausted.

I’ve enjoyed growing older and getting grayer alongside your dad, who continues to inspire me, and I will enjoy growing older with you. You’re transforming into little independent people already.

The summer I turned thirty, just after the Bean was born, I remember telling my mom that I couldn’t believe I was in my thirties now. She told me that she couldn’t believe her baby girl was 30 either! We laughed together at the time, but I realize more each day just how honest that feeling is.

That day—when my own baby is 30—will be here for me before I know it. And I’m not exaggerating when I say that at some point every day, every slow and boring and life-sucking day, I am paradoxically astounded just how quickly the overall time is soaring by.

I had no idea that watching children grow and learn and develop and change would be such a reminder of how much time is sifting through my fingers.

But it still catches me by surprise when I glance in the mirror.